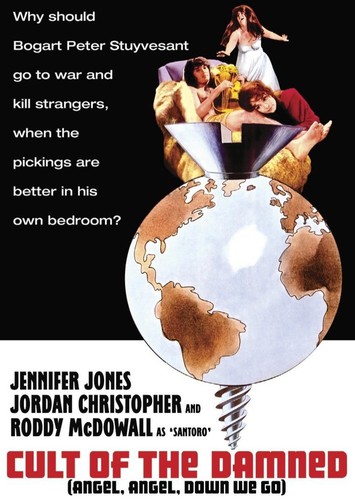 Brace yourself for the maddest Hollywood story ever with this stylish, decadent look at what happens when the upper crust meets the down and dirty. Full figured debutante Tara Nicole (folk singer Holly Near) returns home to her former stag film star mother (Jennifer Jones, Best Actress Oscar winner for the Song of Bernadette) only to fall under the influence of a charismatic, dangerous rock singer (Jordan Christopher) and his way-out deviant band mates (including Roddy McDowall and Lou Rawls). Making it's first-ever release on home video, this colorful cult shocker (originally released as Angel, Angel, Down We Go) from Robert Thom, the writer of Death Race 2000 Bloody Mama, and Wild in the Streets. Cult of the Damned is part horror, part pop musical, part black comedy, and all outrageous!