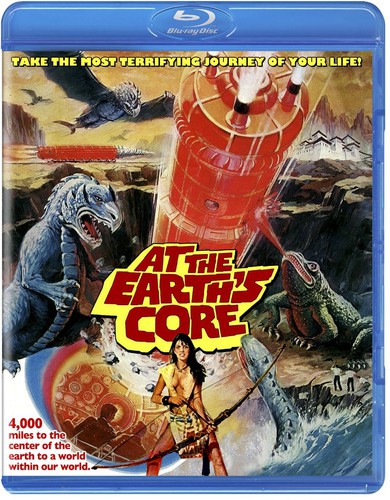 They're in it deep, now! Murderous monsters, scantily prehistoric playmates and telepathic pterodactyls inhabit the center of our world in this colorful fantasy-adventure about a manned 'drill-craft ' boring it's way to the center of the Earth! Starring sci-fi superstars Doug McClure (THE LAND THAT TIME FORGOT), Peter Cushing (NOTHING BUT THE NIGHT) and Caroline Munro (MANIAC), this subterranean chiller is the most endearingly whimsical entertainment on - or under - the planet's surface! There's more than lava at the Earth's core. There's also Pellucidar: an underground empire where gargantuan pterodactyls torture and enslave all humanoids - including the lovely Dia (Munro). But all that could change when a surface-dwelling scientist (Cushing) and an American businessman (McClure) drive their powerful 'Iron Mole ' straight into dirt, rocks and lava! Wonderfully directed by sci-fi specialist, Kevin Connor (THE PEOPLE THAT TIME FORGOT).