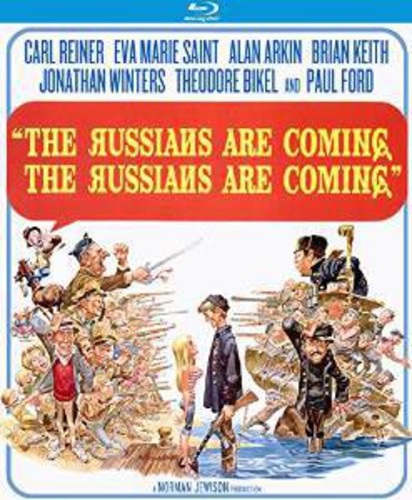 In-Laws) runs his submarine aground off the New England coast, his crews attempts to find a boat to dislodge the sub almost starts World War III. Arkin leads and all-star cast that includes Carl Reiner, Eva Marie Saint, Brian Keith and Jonathan Winters; in this riotous, uproarious and sidesplitting comedy. Russian Lt. Rozanov (Arkin) and his crew hit the beaches of Massachusetts unaware of the panic they're about to start. Despite the Russians' harmless intentions the folks in town think a full-scale Soviet invasion has been launched! What's worse, their police chief (Keith) has left his hysterical assistant (Winters) in charge and the one man who knows the truth (Reiner) is only stirring up more chaos the great Norman Jewison (In the Heat of the Night) directs this wonderful comedy based on the Nathaniel Benchley novel with a screenplay by William Rose (It's a Mad, Mad, Mad, Mad World). T hilarious cast includes Paul Ford, Theodore Bik and John Phillip Law.
back to top