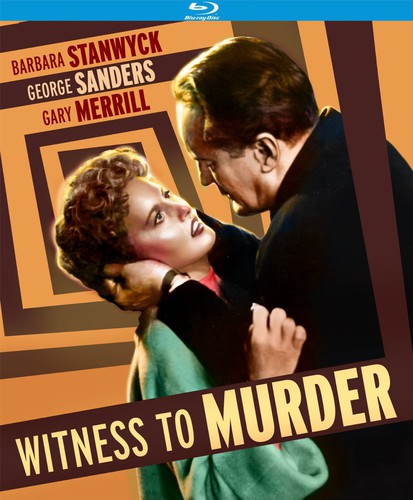 Witness To Murder / (B&W)
Format: Blu-Ray
New: Not on Hand, Let us get it for you
Wish

Newly Re-mastered in HD! a woman fights to convince the police that she witnessed a murder. One sleepless night, Cheryl Draper (Barbara Stanwyck, DOUBLE INDEMNITY) witnesses a young woman being strangled to death in an apartment across the street. She reports the killing to the police, but when the police arrive there is no body to be found. The policemen are convinced that Cheryl probably dreamt the murder and leave ignoring her pleas. Similar to Alfred Hitchcock Rear Window, which opened less than a month later and overshadowed this top-notch film noir featuring great direction by Roy Rowland (THE GIRL HUNTERS) and beautiful black-and-white cinematography by legendary John Alton (HE WALKED BY NIGHT). Co-starring George Sanders (A SHOT IN THE DARK) and Gary Merrill (ALL ABOUT EVE).