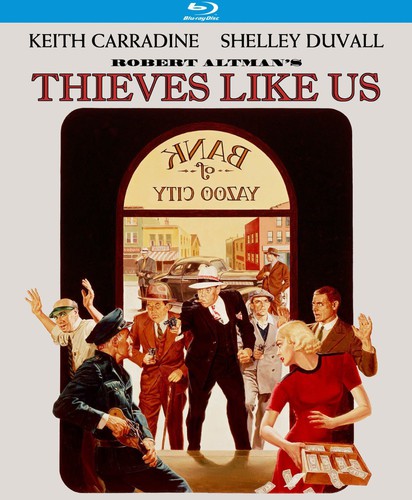 Thieves Like Us
Artist: Lloyd Jones
Format: Blu-Ray
New: Not on Hand, Let us get it for you
Wish

Never has a film portrayed the life of on-the-run bank robbers with such conviction, violence and pathos. Set in Mississippi during the 1930s Depression, THIEVES LIKE US is wonderfully directed by one of America's most revered filmmakers, Robert Altman (THE LONG GOODBYE). Based on Edward Anderson's novel, the film is layer-deep with characterization that gets better every time you look at it. Convicted murderer Bowie (Keith Carradine, SOUTHERN COMFORT) is as tough as the come. So tough, in fact, he's made a daring prison escape and has gone on the lam with two buddies. On a rampage across the country, this armed and dangerous trio is soon wanted for a series of violent bank robberies. But when they hole up in a rural farmhouse, Bowie falls for a young woman (Shelley Duvall, THE SHINING). And as the law draws closer to their hideout, and chances for escape dwindle as the young lover's future looks as doubtful as his surviving the impending blaze of gunfire. The stellar supporting cast includes John Schuck, Bert Remsen, Louise Fletcher and Tom Skerritt.