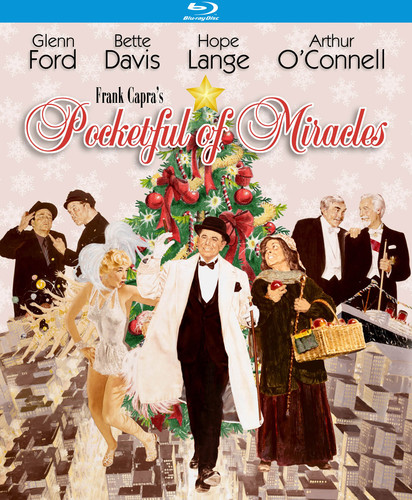 Capricious, winsome, whimsical, and all together delightful! Superbly directed by the peerless Frank Capra (IT'S a WONDERFUL LIFE), this remake of LADY FOR A DAY is pure Hollywood magic - an unforgettable combination of comedy, whimsy and romance that was nominated for three Oscars including Supporting Actor (Peter Falk, TV's COLUMBO). Impoverished Broadway peddler 'Apple Annie' (Bette Davis, ALL ABOUT EVE) has a problem, her daughter Louise (Ann-Margret, TOMMY), educated abroad since infancy, is coming for a visit and bringing her wealthy fiancĂ© with her. The problem is that Louise has believed all her life that Annie's a wealthy dowager, and the poor old women doesn't know what to do. Enter 'Dave the Dude' (Glenn Ford, 3:10 TO YUMA), a kindhearted racketeer who enlists the aid to pass Annie off as a high-society granddame so Louise can marry her fairy-tale prince and everyone can live happily ever after! This Christmas classic was the final film in Frank Capra's glorious career and featured a great supporting cast that included Hope Lange, Arthur O'Connell, Thomas Mitchell, Edward Everett Horton and Barton MacLane.