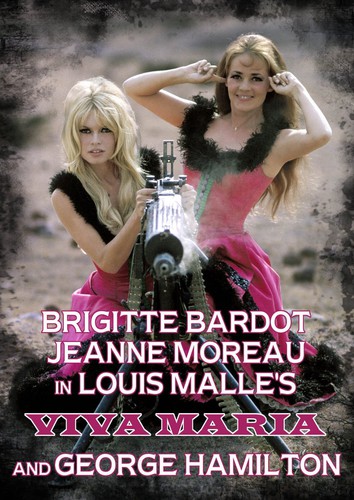 Viva Maria
Format: DVD
New: Not on Hand, Let us get it for you
Wish

France's most famous and beautiful bombshells, Brigitte Bardot (AND GOD CREATED WOMAN) and Jeanne Moreau (JULES AND JIM), make an unbeatable comedy team in this joyfully romantic fairy tale for adults. Fast-paced, eye-catching and filled with sight gags, this hysterical film from legendary director Louis Malle (ATLANTIC CITY) satirizes everything from American westerns to revolutions, dictators, the Church, priesthood and even sex itself. When two women-both named Maria-unwittingly invent the striptease circa 1910, they become such a hit that enthusiastic audiences strip along with them. But when one of the Marias falls for a handsome revolutionary (George Hamilton, LOVE AT FIRST BITE), she finds that she has unwittingly embroiled the two of them in an armed peasant revolt. Peasant revolt.