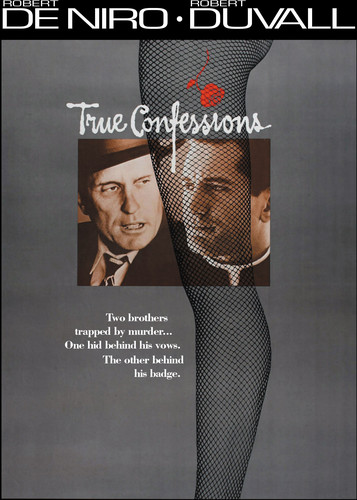 True Confessions
Format: DVD
New: Not on Hand, Let us get it for you
Wish

Screen legends Robert De Niro and Robert Duvall deliver riveting performances as siblings embroiled in a shocking homicide investigation that pits them against one another. Based on the true and still-unsolved 'Black Dahlia' murder case, this entertaining, intelligent and thoroughly satisfying film noir culminates in a mind-blowing climax that will put you on the edge of your seat! Detective Tom Shellac (Duvall) and Father Desmond Shellac (De Niro) find their worlds colliding amidst a flurry of political finger-pointing and public outcries over a scandalous, headline-making murder. As Tom hunts down the elusive killer, his investigation threatens to expose secrets that could ruin his brother and rock the foundation of his beloved Catholic church. The top-notch supporting cast includes Charles Durning, Kenneth McMillan, Burgess Meredith, Cyral Cusack and Dan Hedaya. Stylishly directed by Ulu Grosbard (Straight Time).
back to top