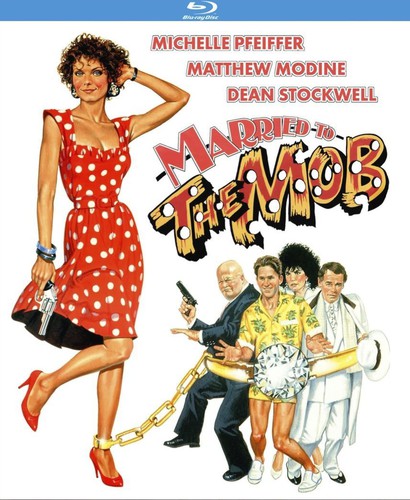 Married To The Mob
Format: Blu-Ray
New: Not on Hand, Let us get it for you
Wish

Michelle Pfeiffer, Matthew Modine, Dean Stockwell, Alec Baldwin and Mercedes Ruehl redefine family values in this bona fide mafia hit that's so hilarious, 'it's an offer you can't refuse' (The Washington Post)! Angela de Marco (Pfeiffer) is stuck in a loveless marriage to an adulterous philanderer who also just happens to be a mobster. Tired of living with a two-timing husband and his laundered money, she gets a new lease on life when he's iced by Tony the Tiger Russo; a ruthless kingpin who's always had a thing for the beautiful Angela and now is free to put the moves on the grieving widow. Kissing the Long Island mafia arrivederci, Angela starts over in Manhattan, finding a new job in a beauty salon, but Tony's hot on her trail, still determined to make her his mob mistress. Now, Angela must choose between helping the FBI or spend the rest of her life being Married to the Mob. Directed by Jonathan Demme (LAST EMBRACE).