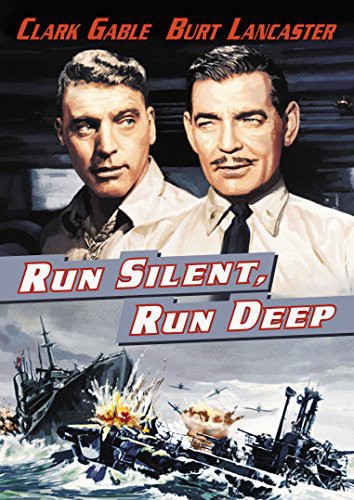 "Run silent, run deep" is a term that accurately describes the mission of the submarine in this tense World War II drama. Commander Richardson (Clark Gable) is the only survivor when his sub is hit by a notorious Japanese destroyer dubbed Bongo Pete in the Bongo Straits of Japan. Back at Pearl Harbor, Richardson obsessively plays out strategies that would have saved his crew. When he is reassigned a new ship in the Pacific, he must face old demons as well as the sub's younger executive officer who was slated for captain, Lt. Bledsoe (Burt Lancaster). Bledsoe has the support of his crew and locks horns easily with Richardson, but when the captain disobeys navy orders to stay clear of the Bongo Straits, taking the crew right in to go after Bongo Pete, there is very nearly a mutiny. RUN SILENT, RUN DEEP is marked by strong performances, particularly by Gable, and a taut script. The scenes of the rigorous sub drills the captain puts his crew through are intensive and exceptional.