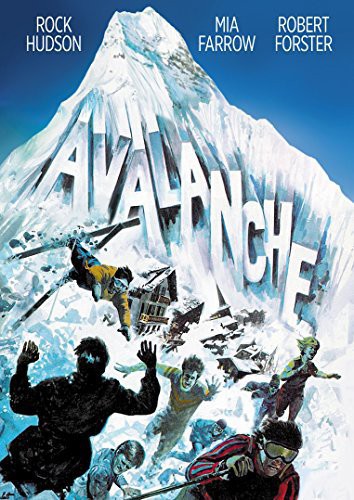 Avalanche
Format: DVD
New: Not on Hand, Let us get it for you
Wish

Six Million Tons of Icy Terror! a winter wonderland becomes a nightmare of chaos and destruction, when an Avalanche smashes into a ski resort. Now a holiday vacation will become a struggle for survival. Once producer Irwin Allen became Hollywood's master of disaster in the 70s by cranking out spectacles like THE TOWERING INFERNO and THE POSEIDON ADVENTURE, legendary cult producer, Roger Corman (DEATH RACE 2000) finally decided to produce his own disaster film, making his own special contribution to the unique genre. Rock Hudson (GIANT) plays David Shelby, the owner of a ski resort who rebuffs warning that his resort is built on dangerous ground, visiting him for the ski lodges opening are his mother (Jeanette Nolan, MacBeth), his estranged ex-wife Caroline (Mia Farrow, ROSEMARY'S BABY) and hundreds of guest and media members. Directed by TV veteran Corey Allen (THUNDER AND LIGHTNING) and co-starring Robert Forster (JACKIE BROWN) as Hudson's rival.
back to top