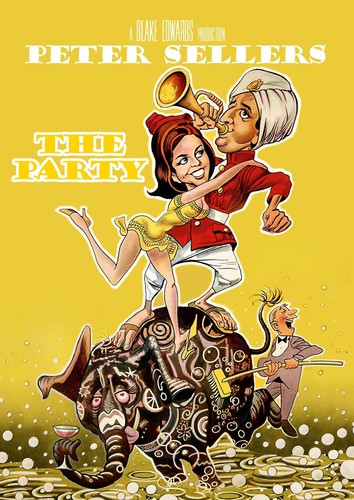 In One of Their Few Non-Clouseau Efforts, Director Blake Edwards (Victor Victoria) and Star Peter Sellers (What's New Pussycat?) Preserve the Spirit of the French Bumbler in the Person of Hrundi V. Bakshi, An Accident-Prone Indian Actor. Brought to Hollywood to Play the Title Role in Son of Gunga Din, Bakshi Destroys the Film's Most Elaborate Set with His Bungling and Is Banned from the Set By the Film's Producer. But Because of An Error By the Producer's Secretary, Bakshi's Name Is Added to the Guest List of His Next Party, An A-List Affair. Shortly After Arriving, Bakshi Begins Accidentally Dismantling the Producer's Carefully Staged Event, Destroying a Flower Bed, Knocking a Servant Through a Bay Window, and Triggering the Lawn Sprinklers, Soaking the His Pretentious Guests. Sellers Is Typically Brilliant in a Film Abounding in Sidesplitting Sight Gags with a Script By Edwards, Frank Waldman (The Pink Panther Strikes Again) and His Brother Tom Waldman (Inspector Clouseau).