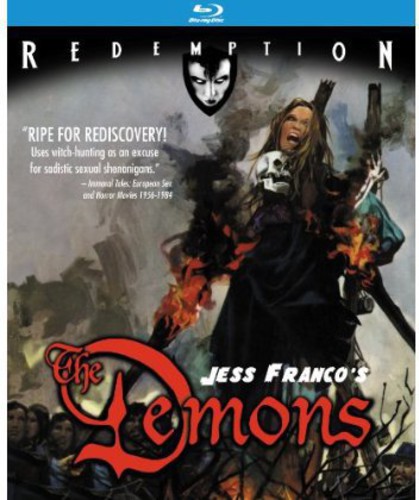 Cult filmmaker Jesus Franco as 'Clifford Brown' directed this semi-sequel to his own THE BLOODY JUDGE without Christopher Lee but with copious amounts of sadism and sleazy sex. Cihangir Gaffari takes over Lee's role as the witchfinder Lord Jeffreys, cursed along with Lady de Winter Karin Field and her lover Capt. Renfield Alberto Dalbes by a dying witch. The witch had two daughters, Kathleen Anne Libert and Marguerite Britt Nichols, whom she vowed would avenge her death, so Lady de Winter sets out to find them in a convent. After a great deal of explicit lesbianism, Lady de Winter learns that the girls' father is actually her own husband Howard Vernon. Rather than a strict sequel, Les Demons appears to have been inspired mainly by the success of Ken Russell's THE DEVILS 1971.