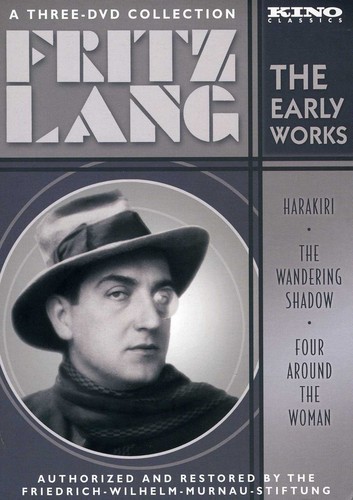 HARAKIRI (aka Madame Butterfly) (1919): O-Take-San (Lil Dagover) is a beautiful young woman pursued by an evil Buddhist monk (Georg John) who wants to make her one of his many geishas. She has an affair with the Danish officer Niels Prien (Olaf J. Anderson) who leaves her alone and pregnant. O-Take-San considers ritualistic suicide when she is abandoned in this tragic melodrama directed by Fritz Lang (Metropolis). THE WANDERING SHADOW (aka the Moving Image or the Wandering Image) (1920): After the death of his brother George, John Vanderheit expects to inherit his fortune. Unfortunately, just before he died, Georg made a will in which he bequeathed his entire estate to his wife, Irmgard. Unwilling to yield to John, she escapes and undertakes a hazardous journey into the mountains where she meets a kindly hermit who offers her shelter. John is not far behind, however, and when Imrgard repulses him he causes an avalanche in an attempt to kill her. Trapped in the hermit's shelter, she discovers a truth that will change their lives forever. FOUR AROUND A WOMAN (1921): In search of an expensive present for his wife Florence, wealthy stockbroker Harry Yquem visits a shady jewel market frequented by crooks and other undesirables. Here, he sees a man whom he recognizes from a photograph in his wife's possession. Suspecting that the man, William Krafft, is his wife's lover, Yquem follows him to the hotel where he is staying. He writes a letter in his wife's handwriting inviting Krafft to his house so that he can confront him and extract a confession. What Yquem does not know is that Krafft has a twin brother, Werner, who has just returned to town with the intention of renewing an old love affair with Florence. Another man, Meunier, knows the truth of Florence's past indiscretions and intends to exploit this for his own gain.