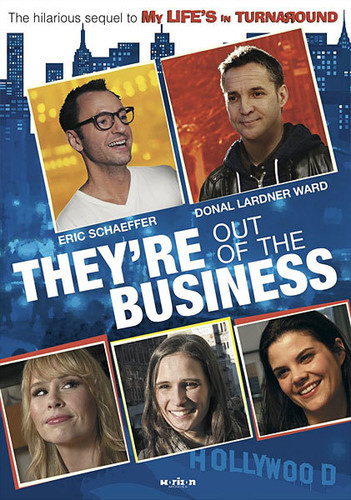 They're Out of the Business
Artist: yre Out Of The Business
Format: DVD
New: Not on Hand, Let us get it for you
Wish

In 1994, the independent movie movement exploded into the mainstream with hits like Clerks, Pulp Fiction and My Life's in Turnaround. Now, almost twenty years later, Eric Schaeffer (Adventure land) and Donal Lardner Ward (The Suburbans) return to the roles that made them famous in They're Out of the Business, the hilarious sequel to My Life's in Turnaround. Two independent filmmakers attempt to bury the hatchet for the betterment of both their careers after success starts to fade, and middle age looms ominously. Fifteen years ago, Splick and Jason collaborated on the indie hit that launched them both to stardom. Then, in the late '90s, came the fallout. Now, with their careers stalled out and their personal lives in shambles, Splick and Jason decide that the best way to forge ahead is to leave the past behind. Unfortunately for both, forgiving others is sometimes easier said than done.