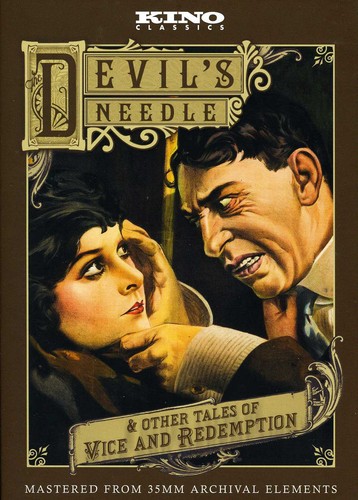 The Devil's Needle and Other Tales of Vice and Redemption
Artist: Devils Needle & Other Tales Of Vice & Redemption
Format: DVD
New: Not on Hand, Let us get it for you
Wish

In it's continuing effort to showcase the great works of early cinema, Kino Classics launches a new series of Blu-ray and DVD releases dedicated to archival rarities - influential classics that have gone virtually unseen for decades. Presented in association with the Library of Congress, the films have been mastered in HD from the original film elements and are backed with newly commissioned musical scores. In some cases the films survive in less-than-perfect condition. But it is the mission of this series to preserve and promote these films in spite of their flaws, rather than allow them to disappear entirely from the cultural radar. THE DEVIL'S NEEDLE AND OTHER TALES OF VICE AND REDEMPTION is comprised of three feature films that dared to address incendiary subject matter: drug abuse, prostitution, and the exploitation of labor. By folding these explosive issues within layers of melodramatic storytelling, the filmmakers were able to dodge public criticism while making their political views even more compelling. These films were among the first to demonstrate the cinema's potential as a persuasive cultural force. THE DEVIL'S NEEDLE (1916, dir: Chester Withey) stars silent superstar Norma Talmadge as Renée, a French artist's model who uses morphine as an escape from the dull reality of her life. She recommends it to a neurotic artist played by Tully Marshall (Queen Kelly), because "it kindles the fires of genius." the artist quickly becomes addicted to the drug and the quality of his work begins to disintegrate. He takes on a new model, marries her, and starts her on the same path of moral degradation, until a guilt-ridden Renée decides to intervene in order to save them both. According to silent film historian Kevin Brownlow, THE DEVIL'S NEEDLE was banned by the state of Ohio, but the censor board reversed it's decision after recognizing the positive message beneath the film's scandalous surface. This special edition was mastered from a 35 mm preservation print of the 1923 re-release version. The only known surviving copy, the element suffers significant nitrate decomposition during some scenes. (66 min) THE INSIDE OF THE WHITESLAVE TRAFFIC (1913, dir: Frank Beal) is one of the most notorious films of the silent era, as it not only centered on the theme of forced prostitution, "It goes in for the utmost fidelity in picturing the evil which has been it's inspiration" (Variety). Demonstrating the methods of the network of American pimps known as "white slavers" in meticulous detail (including a helpful guide to underworld slang), the film plays more like docudrama than melodrama. It is easy to see why it was such a public sensation upon it's release. The complete four-reel version of the film no longer exists. This edition was mastered from the sole surviving copy, a two-reel version that has experienced significant damage. Explanatory titles have been added to bridge missing footage. (28 min) CHILDREN OF EVE (1915; dir: John Collins) is most famous today for it's detailed reenactment of the tragic fire at the Triangle Shirtwaist Factory in 1911, which had become a symbol of unsafe working conditions and capital's apparent disregard for labor. Viola Dana stars as an illegitimate child of the slums who labors in an oppressive canning company, not realizing she has a significant connection to the cold-hearted factory owner. This special edition includes outtake footage of the sensational fire scene, for which the Edison Studios set an actual four-story factory ablaze. (73 min.