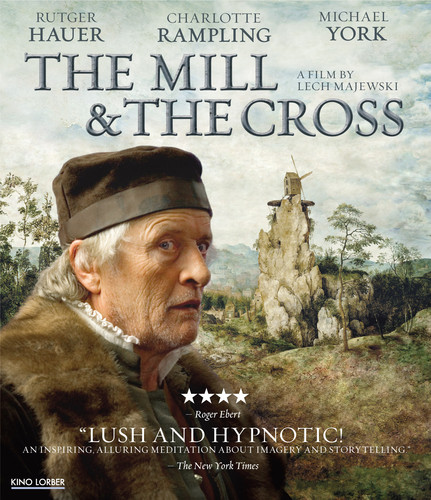 Blu-ray. The Mill & the Cross is a "film of great beauty and attention" (Roger Ebert) that stunningly recreates one the great masterpieces of painting, Pieter Bruegel the Elder's the Way to Calvary. Director Lech Majewski (The Gospel According to Harry) brings the viewer inside the painting with immersive period detail and jaw-dropping digital effects. The daily life of 16th century Flanders is rendered with astounding detail, from the routine of the windmill caretaker to the crusading Spanish militia, who abuse Protestants with brutally violent tactics. Rutger Hauer (Blade Runner) stars as Bruegel himself, touring inside his own canvas and discussing the origin of his work while his wealthy patron, Nicolaes Jonghelinck (Michael York, the Three Musketeers), bemoans the state of his disintegrating country. The film also features Charlotte Rampling (The Night Porter) as the Virgin Mary. An "inspiring, alluring meditation about imagery and storytelling" (NY Times), the Mill & the Cross is a one-of-a-kind marvel of art historical investigation (adapted from a book by art critic Michael Francis Gibson) that truly brings a great painting to life.