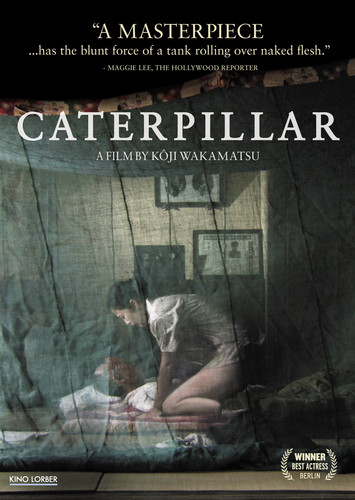 Set during the time of the Second Sino-Japanese War, Caterpillar tells the story of a Japanese soldier who returns home horrifically mutilated. Liutenant Kurokawa is literally nothing but a human torso: he has lost both his arms and legs, and with burns covering half his face, he is also unable to speak. His wife, Shigeko (Shinobu Terajima), is given the grueling task of looking after him, which, in addition to feeding and washing him, includes the job of satisfying his sexual desires - impulses that remain as strong as ever in spite of his disabled condition. Taught to be dutiful and to do her part for her country, Shigeko bears her burden - but as she realizes that her husband's life lies entirely in her hands, she begins to question the role she has accepted. A film that won Shinobu Terajima the Silver Bear award for Best Actress at the 2010 Berlin Film Festival, Caterpillar is at heart a powerful indictment of Japan's militaristic, nationalistic past. From acclaimed director Koji Wakamatsu (United Red Army).