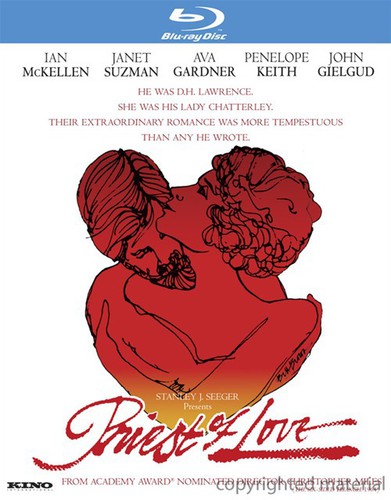 Priest Of Love
Artist: Mckellan/Suzman
Format: Blu-Ray
New: Not on Hand, Let us get it for you
Wish

In his first starring role, Sir Ian McKellen (LORD OF THE RINGS, GODS AND MONSTERS) gives a sensational performance as D.H. Lawrence in the PRIEST OF LOVE. Working alongside Hollywood legend Ava Gardner (PANDORA AND THE FLYING DUTCHMAN) and director Christopher Miles, McKellen shows Lawrence in all his rebellious grandeur, thumbing his nose at authority while still managing to write masterpieces. The film begins with the English government burning copies of the Rainbow, and continues through his exodus around the world, joined by his combative wife Frieda (Janet Suzman). from his destructive sojourn to the American Southwest, to an earth-shaking visit to Oaxaca, and finishing with his erotic adventures in Italy, PRIEST OF LOVE provides a colorful and insightful portrait of Lawrence's life and art.