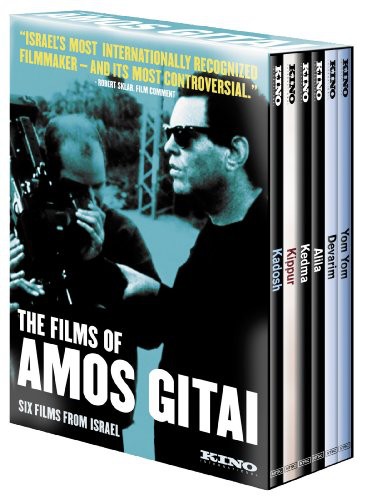 Films Of Amos Gitai
Format: DVD
New: Not on Hand, Let us get it for you
Wish

Kadosh (1999) - Set in the Mea Sherim quarter of Jerusalem, an enclave of the ultra-Orthodox, Kadosh explores a hermetic world almost never seen on the screen. Here, for ten years, the pious Rivka (Yael Abecassis) has devoted herself to her husband Meir (Yoram Hattab), but their marriage remains childless. Presumed barren, she is rejected by her community, which prizes children above all else. The story that follows relates the harrowing fate of Rivka, and also here beloved sister Malka (Meital Barda), in love with a young man who has fled the community to lead a secular life. A huge box office hit in Europe, Kadosh is both a powerful drama and an impassioned feminist polemic. As religious fundamentalism achieves new political significance in many countries around the world, the questions at the heart of Gitai's compelling drama resonate far beyond the borders of Israel. Kippur (2000)- An official selection at the Cannes, New York and Toronto Film Festivals, Kippur focuses on the presence of the human spirit in battle. Despite it's extreme graphic depiction of war, the film was recognized as a major cinematic breakthrough. Called an (existential rather than a political event) by A.O. Scott of the New York Times, Kippur is a gut-wrenching journey through beautiful landscapes ravaged by gunfire, exploding mines, fear and desolation. The film takes place in 1973 during the Yom Kippur War, in which Egypt and Syria launched attacks in Sinai and the Golan Heights. Although the story is told from the perspective of Israeli soldiers, the film is far from being an exercise in propaganda. Kedma (2002) - An Official Selection at the 2002 Cannes Film Festival, Kedma is renowned Israeli filmmaker Amos Gitai's powerful drama about a group of European Jewish refugees who arrive at Palestine in the critical year of 1948. Carried on the deck of the freighter Kedma, they come ashore to find not the Promised Land of milk and honey, but a war-torn desert in the bloody throes of transformation into the state of Israel. Alila (2003) - in Alila, director Amos Gitai (Israel's one-man new wave - the Village Voice) has created an (engaging, subtly arresting drama - Time Out New York) that examines the lives of a half dozen residents of a run-down Tel-Aviv apartment building. This Altmanesque panorama explores, (with humor and humane spirit - Time Out), the loneliness and deep need for connection that exists behind the closed doors of those living on the margins. Devarim (1995) - Devarim is Amos Gitai's debut narrative feature and the first installment in his renowned (City Trilogy) concluded by 1998's Yom Yom and 1999's Kadosh, a remarkable trio of films each based in one of Israel's thriving metropolises. Making full use of a decade of documentary experience, Gitai transformed Ya'ackov Shabatai's audacious single-sentence cult novel (Zihron Devarim) into an intricate portrait of three disaffected Tel Aviv men and the city they call home. Yom Yom (1998) - in Yom Yom, the second film in Amos Gitai's celebrated (City Trilogy), a darkly comic tale of characters driven by divided loyalties and neurotic inhibitions in the mixed nationality Mediterranean port city of Haifa. Featuring a top-flight ensemble Yom Yom is a film of unusual wit, grace and insight.