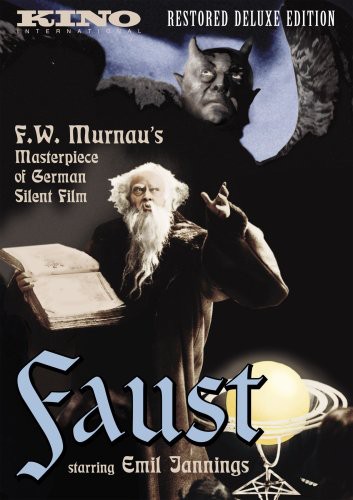 Fresh from the triumphant releases of Nosferatu and the Last Laugh, F.W. Murnau was given carte blanche to direct this epic fable of the supernatural. Freed from the burden of plausibility by the story's fantastic premise, Murnau summoned forth a tempest of cinematic brimstone so that every scene ripples with reckless ingenuity. Utilizing the full resources of the UFA Studios (including elaborate miniature models and experimental special effects), Faust captures the intensity of a medieval universe stepped in religious fanaticism and pagan alchemy. Black-hooded pallbearers lead a torch-lit procession through a plague-stricken village literally cloaked by the wings of Satan. Crowded landscapes materialize and vanish in wisps of smoke, daemonic creatures soar through the heavens and earthly beings are tormented by the vaporous spirits that permeate the dungeon-like homes and Caligari-esque rooftops of this shadow world. In the eye of this infernal maelstrom is the great Emil Jannings (Othello), who sets off the film's sound and fury with a diabolically engaging performance, making Faust (in the words of the New York Times) "A radiant jewel... a masterpiece!"