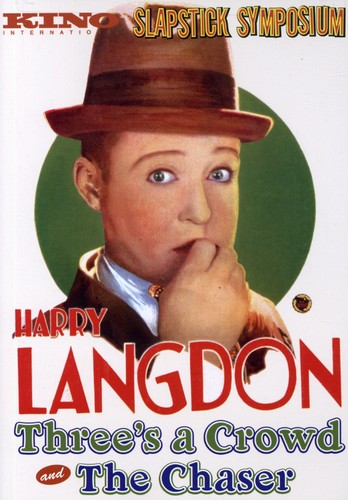 Three's A Crowd & The Chaser
Format: DVD
New: Not on Hand, Let us get it for you
Wish

Three's a Crowd, didn't just dabble in pathos, it plunged it's hapless hero into a netherworld of loneliness worthy of Samuel Beckett (a self-avowed Langdon fan). Harry stars as a slum-dweller who invites a freezing woman (Gladys McConnell), pregnant with another man's child, into his home. Nursing mother and child back to health, he achieves his dream of having a family... or so he hopes. Langdon's second film as director, the Chaser is a dark, slightly kinky comedy in which carousing Harry is ordered by a judge to swap domestic duties (and clothing) with his wife. Deprived of his manliness, Harry contemplates suicide while coping with flirtatious salesmen and the scorn of a former comrade.