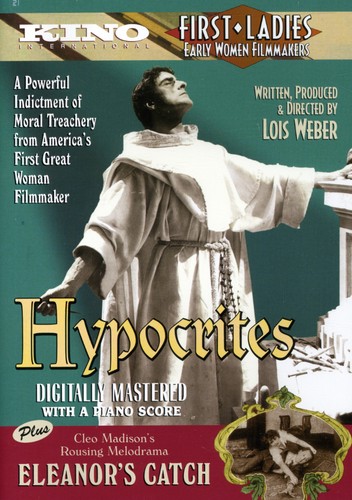 Hypocrites & Eleanor's Catch (Silent)
Artist: Hypocrites 1915/Eleanors Catch 1916
Format: DVD
New: Not on Hand, Let us get it for you
Wish

Hypocrites is an amazingly complex film in both narrative and technique, following the parallel stories of an early Christian ascetic and a modern minister, with most actors in duel roles. Gabriel (Courteney Foote) is a medieval monk who devotes himself to completing a statue of "Truth" only to be murdered by a mob when his work turns out to be an image of a naked women. The contemporary Gabriel is the pastor of a large urban congregation for whom religion is a matter of appearances, not beliefs. The hypocrisy of the congregation is exposed by a series of vignettes in which the Naked Truth, literally portrayed by a nude women, reveals their appetites for money, sex and power.