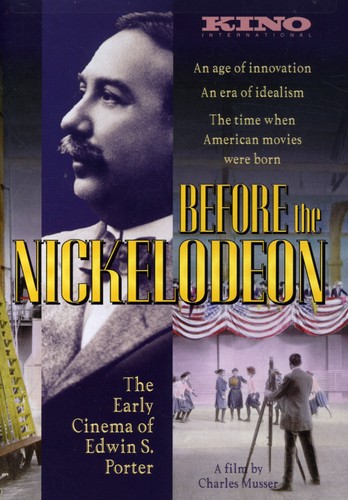 Before the Nickelodeon: The Early Cinema of Edwin S. Porter
Format: DVD
New: Not on Hand, Let us get it for you
Wish

Noted film historian Charles Musser (The Emergence of Cinema) co-wrote and directed this definitive tribute to Edwin S. Porter, Thomas Edison's mechanic and cameraman, who is now recognized as America's first important filmmaker and a major contributor to the evolution of film structure. Porter was the first U.S. filmmaker to successfully explore the possibilities of making films with continuous action from shot to shot, instead of single scene films that showman arranged at the point of exhibition. From the time of his hugely successful the Great Train Robbery (1903) until Griffith started at Biograph (1908), Porter held center stage in early American cinema. Sadly, however, Edison quickly discarded Porter once his approach to filmmaking seemed to have become old-fashioned. Narrated by silent-movie actress Blanche Sweet, Before the Nickelodeon is a treasure trove of rarely seen material, including hand-colored photographs and sixteen complete Porter films, among them the May Irwin Kiss (1896), the Sunken Battleship 'Maine' (1898), Jack and the Beanstalk (1902) and Life of an American FIreman (1902-3).
back to top