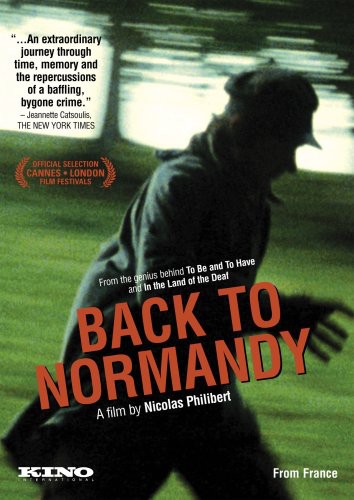 Back to Normandy
Format: DVD
New: Not on Hand, Let us get it for you
Wish

In 1976, French director Rene Allio made Moi, Pierre Riviere, a film based on a 19th-century countryside murder. The story had recently resurfaced thanks to Michel Foucault, who, after discovering the peasant murderer Riviere's beautifully expressed confession, wrote a book about the case. Allio wanted to film the story on location, using farmers from the region of Normandy, where the crime occurred. 24-year-old Nicolas Philibert, the assistant director, was tasked with scouting locations and finding a cast among the locals. Thirty years later, Philibert returns to the region to catch up with the earlier film's players, to revisit a page from his own history, and to tell the stories of this strange murder and the film that recreated it. Back to Normandy is a film about the passage of time. In seeking out the cast, Philibert explores how we make connections between past and present, creating our own meaningful and personal narratives. As Phillibert reveals the motivations for the crime of Pierre Rivi+Âżre, we also learn of the mysterious disappearance of the melancholy young villager who played him, Claude Hebert. When we finally learn what became of him, the parallels between the actor and his role are startling. A subtle and contemplative film, Back to Normandy also follows Philibert as he delves into the diaries of his mentor Allio, telling the director's story and chronicling the difficult production history of his most ambitious film. The patterns of rural life - the passing of the seasons, the raising of livestock, the cultivation of the land - have an amazing continuity stretching back from the 1830s to the present day. Like Ermanno Olmi's the Tree of Wooden Clogs (1978), it is an understated, pastoral epic.