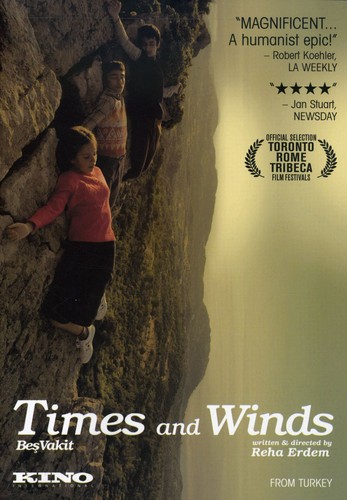 Times and Winds
Format: DVD
New: Not on Hand, Let us get it for you
Wish

Winner of the Best Film and FIPRESCI prizes at the Istanbul International Film Festival, Reha Erdem's Times and Winds is a film "bewitched by the rhythms of everyday life" (The Village Voice) that "packs a poetic-spiritual punch way beyond it's placid surface" (Variety). Laying bare forbidden yearnings, dawning sexuality, and oedipal rage, it tells the story of three pre-adolescent friends coming of age in a remote Turkish mountain village. Young teen Omer (Ozkan Ozen) contemplates the unthinkable as he bitterly struggles under the loveless emotional yoke of his scornful Muslim cleric father. Yakup (Ali Bey Kayali), Omer's best friend, obsesses over a beautiful schoolteacher. Yildiz (Elit Iscan) recoils from burgeoning womanhood, and from the sordid carnal realities she has grown too old to ignore. Blessed with painterly wide-screen visuals, Estonian composer Arvo Part's sublime music score, and phenomenally surefooted performances from an astonishingly adept young cast, Times and Winds contrasts a parochial society's unending chain of cruelty with the pagan natural world's eternal and sensual beauty. Wise in it's depiction of the cycle of life, and unblinking in it's exploration of fate's capricious malice and childhood's discontent, Times and Winds' "vision of people in thrall to religious ritual and living at the mercy of nature may be poetic, but it is no idyll" (The New York Times).