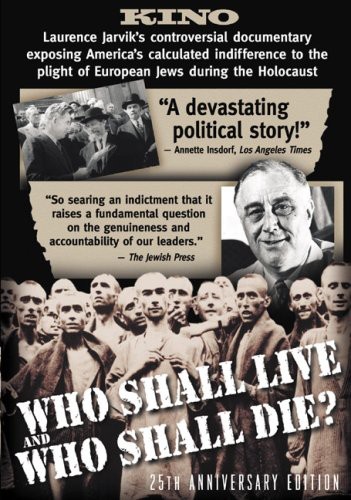 This penetrating documentary about America's knowledge of the Holocaust during the Second World War dares to ask, "Could the Jews of Europe have been saved?" Documentary filmmaker Laurence Jarvik boldly confronts this question, exploring the actions and inaction of the Roosevelt Administration and American Jewish leaders and exposing the political tradeoffs that kept the doors closed to Jewish emigrants fleeing the Nazi regime. Requests were made to bomb Auschwitz, set up a Jewish army and construct rescue havens, yet no action was taken. Containing previously classified information, contemporary interviews and rare newsreel footage, this film is a unique chronicle of important decisions made by the American political and Jewish establishments during World War II. "Who Shall Live and Who Shall Die? provides a much needed history lesson for all who are either too young to know, or who were never told the facts." (Neil Barsky, Jewish Students Press Service).