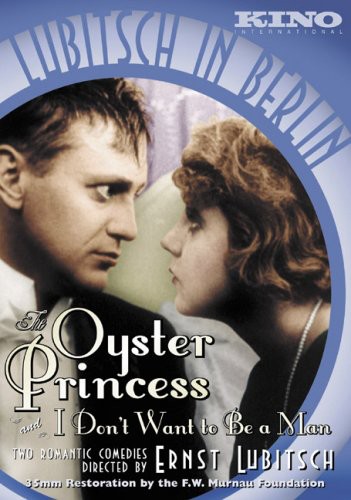 Fans of the legendary director Ernst Lubitsch have often spoken of the "Lubitsch touch," that hard-to-define quality that is present throughout his work and that makes his best films, from the Marriage Circle (1924) to to Be or Not to Be (1942), masterpieces of sophisticated comedy. But as these two early and very rare films make clear, the Lubitsch touch was present almost from the beginning. In the Oyster Princess (1919), a pampered American oyster tycoon decides to find a prince to marry his daughter, but things don't go quite as planned. Along the way, there are mishaps, misunderstandings and a foxtrot sequence that must be seen to be believed. In I Don't Want to Be a Man (1918), a teenaged tomboy, tired of being bossed around by her strict guardian, impersonates a man so she can have more fun, but discovers that being the opposite sex isn't as easy as she had hoped. What ensues is a gender-bending comedy that was decades ahead of it's time. Each film is, in it's own unique way, pure Lubitsch and a true classic of absurdist comedy. Both films were made in Germany before Lubitsch emigrated to the U.S., and both star Ossi Oswalda, a gifted comedic actress who headlined several other silent films for Lubitsch, notably the Doll (1919). But the real star is the director and his unmatched ability to turn even the simplest of acts, from reading the newspaper to getting fitted for a tuxedo, into brilliant bits of deliciously subversive comedy.