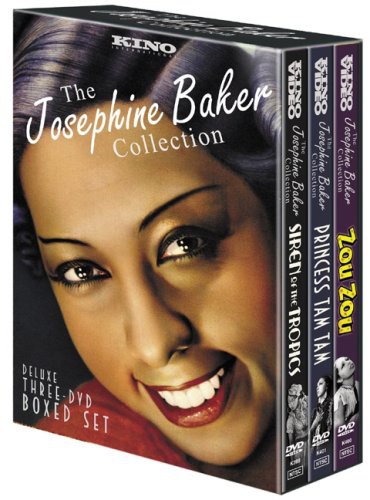 Siren of the Tropics - Available only as a fragment for decades, Siren of the Tropics is Josephine Baker's feature film debut. Made in 1927, around the time Josephine was making a Paris splash as a Folies Bergere star, Siren establishes the rags to riches, fairy tale template from which her subsequent films would be cut. The film would be cut. The film contains perhaps Josephine's greatest dance work on celluloid, the frenetic "Charleston". And among the crew was a very young Luis Bunuel! Zou Zou - Conceived as a vehicle for Josephine Baker, then among Europe's most popular entertainers, Zou Zou was her debut talking film. In the tradition of 42nd Street, it tells the story of a star who walks out on her sugardaddy producer, only to be replaced by a talented Cinderella (Baker) who saves the show and is hailed as a new sensation overnight. Features Josephine's poignant rendition of "Haiti," sung while clad in feathers and swinging in a birdcage, plus a great co-starring turn by Jean Gabin (Grand Illusion). Princess Tam Tam - Princess Tam Tam is a Pygmalion-like comedy in which Josephine Baker stars as a mischievous shepherd girl who rises through society to become a pretend princess and the toast of Paris nightlife. Includes the famous scene in which Josephine's character is coaxed into drinking too much, whereupon she leaps onto a nightclub stage, strips off her shimmering evening gown, and dances as only La Baker could. Also, Josephine sings "Dream Ship" and "Neath the Tropical Blue Skies".