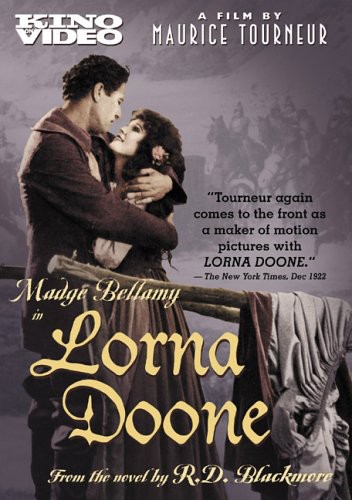 Lorna Doone
Format: DVD
New: Not on Hand, Let us get it for you
Wish

Lorna Doone was filmed three times before in the silent era, and six times more in the sound era, but the 1922 production directed by Maurice Tourneur is arguably one of the finest, and without a doubt the most beautiful. Like most of the feature adaptations of Lorna Doone, the 1922 version allows the romance and action of the novel to exist largely untouched by the tumult of the English Civil War. a young girl of noble birth is kidnapped by the Doones, a feared band of thieves and cutthroats. Their leader, fallen nobleman Sir Ensor Doone, raises the girl, Lorna, as one of his own kin. Lorna secretly falls in love with yeoman John Ridd, but must contend with the brutish Carver Doone, who wants Lorna for his own. In Lorna Doone, Tourneur uses natural lighting and the landscape to frame his actors with painterly effect, showcasing a very different set of aesthetic values than those of the Blue Bird, with it's elaborate stylized sets and costumes. Both are representative gems of his silent work, much of which remains lost.