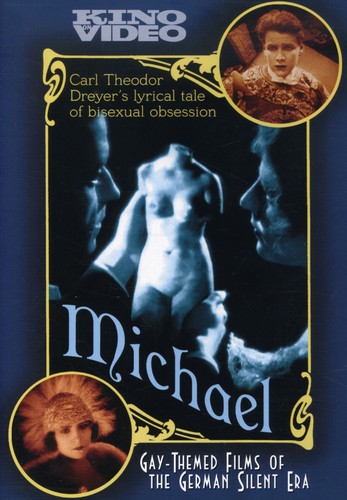 Michael
Artist: Michael
Format: DVD
New: Not on Hand, Let us get it for you
Wish

Danish film master Carl Theodor Dreyer's Michael is a mature and visually elegant period romance decades ahead of it's time. Available for the first time on DVD, Michael takes it's place alongside Dreyer's better known masterpieces as an unusually sensitive and decorous work of art and is one of the earliest and most compassionate overtly gay-themed films in movie history. Collaborating with famed German cinematographers Karl Freund (Metropolis, the Last Laugh) and Rudolph Mate (Passion of Joan of Arc, DOA) Michael offers the first fully realized example of Dreyer's emotionally precise, visually extravagant style. Based upon Herman Bang's 1902 novel, Dreyer's Michael refashions the classical Greek myth of Jupiter and Ganymede into a love triangle between an aging artist, Zoret (director Benjamin Christensen), his protege Michael (Walter Slezak, later to play the Nazi villain in Hitchcock's Lifeboat) and Princess Zamikoff (Nora Gregor, Rules of the Game), an aristocratic femme fatale as entranced by Michael's youthful beauty as Zoret is. As Michael plunges from the dizzying heights of new love to the depths of theft and betrayal, Zoret experiences a spiritual rebirth from out of the ashes of rejection and despair. A film of exquisite artistry, Michael is both elaborately theatrical and remarkably restrained. Dreyer elicits vivid and passionate performances from his adroit cast, including the screen's only acting appearance by cinematographer Freund. Co-written by Fritz Lang's wife and collaborator Thea Von Harbou (M, Metropolis), this intimate and compelling film possesses a bold level of emotional detail and depicts the twilight of a male-male romance with unusual daring and subtlety.