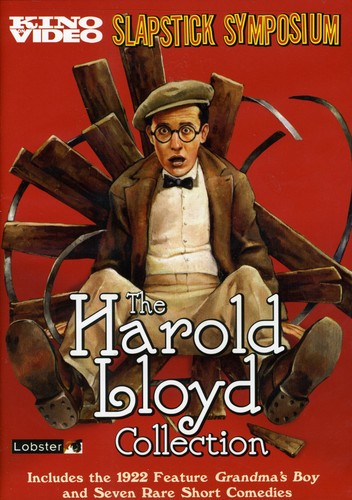 A standout contributor to the art of silent film comedy, Harold Lloyd (1893-1971) offers new generations a body of film work that is as fresh and entertaining as in it's day. His roots were simple - born in rural Nebraska, product of a broken home, and initially destined for legitimate stage - yet by the 1920s Lloyd was, both at the box office and in the polls, the most popular comic actor in the world. His appeal was simple, yet legendary: The his Glass Character, which formed the basis of roles from 1917-1947, Lloyd struck gold with a screen persona that forged new ground. The Boy, as he was most often called, had one trademark - lens-less horn-rimmed glasses- yet was able to reach audiences as no contemporary could. He is regarded as the man who most greatly influenced eyeglass-wearing in America, and this single facet of Lloyd inspired youth worldwide. His screen normalcy in look and demeanor allowed moviegoers to relate to the Glass Character no matter what his label. Rich or poor, cowardly or flip, from film to film, Lloyd was a different Boy, and was able to create a cinematic legacy that remains both diverse and uniformly thrilling. Harold Lloyd might just be the funniest actor you've never seen - a silent screen comedian so often placed in the shadow of Chaplin and Keaton - but he continues to shine in some of the most enduring short- and feature-length comedies ever offered to audiences.
This website uses cookies to personalize content and analyse traffic in order to offer you a better experience.
I accept Learn More
back to top