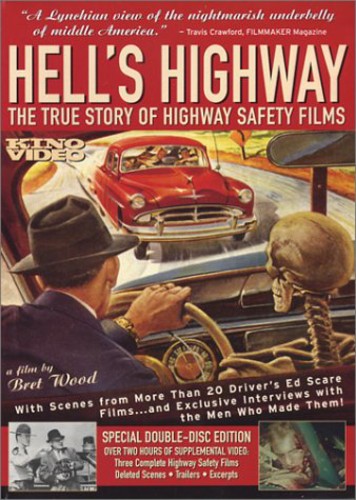 Hell's Highway: The True Story of Highway Safety Films
Artist: Richard Anderson
Format: DVD
New: Not on Hand, Let us get it for you
Wish

Critically-acclaimed upon it's 2003 theatrical release, Hell's Highway the True Story of Highway Safety Films recovers a missing chapter of American film history as it examines the fascinating and shocking driver education films of yesteryear. Produced between 1959 and 1979 by a group of volunteers in Mansfield, Ohio, these films promoted safety by presenting color footage of careless driving's dark consequences: blood-stained wreckage, injured bodies, fresh corpses. In the 1970s and '80s, these films disappeared from the American classroom and assumed an almost mythical status among those who had once seen them. Hell's Highway unearths these artifacts of grim Americana and interviews the filmmakers responsible for this radical educational movement.
This website uses cookies to personalize content and analyse traffic in order to offer you a better experience.
I accept Learn More
back to top