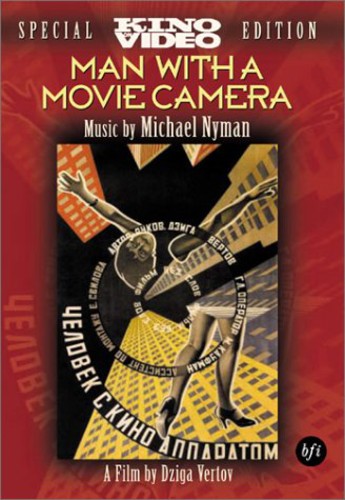 Man With a Movie Camera
Artist: Man With A Movie Camera
Format: DVD
New: Not on Hand, Let us get it for you
Wish

Dziga Vertov's Man with a Movie Camera is considered one of the most innovative and influential films of the silent era. Startlingly modern, this film utilizes a groundbreaking style of rapid editing and incorporates innumerable other cinematic effects to create a work of amazing power and energy. After his work on the Commissar Vanishes, a multi-media art event of 1999, composer Michael Nyman (The Piano) continued researching the period of extraordinary creativity that followed the Russian Revolution. This artistic inquiry resulted in the celebrated score for Man with a Movie Camera, performed by the Michael Nyman Band on May 17, 2002 at London's Royal Festival Hall. This dawn-to-dusk view of the Soviet Union offers a montage of urban Russian life, showing the people of the city at work and at play, and the machines that endlessly whirl to keep the metropolis alive. It was Vertov's first full-length film, and it employs all the cinematic techniques at the director's disposal; dissolves, split-screens, slow motion and freeze frames - to produce a work that is exhilarating and intellectually brilliant.