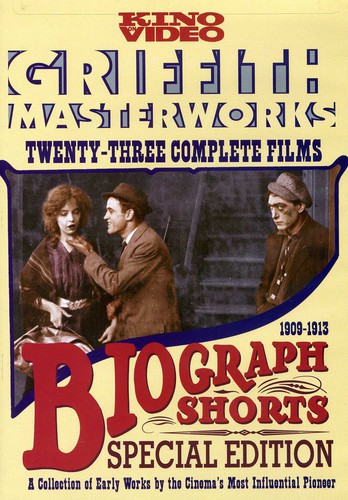 The selection of motion pictures featured in this two-disc set traces D. W. Griffith's rapid unparalleled development as a filmmaker during his five year stint at the Biograph Company-a development that contributed substantially to the emergence of film as a powerful form of cultural expression. From the crude humor melodramatic devices of the Adventures of Dollie (1908) through the remarkably dynamic the Battle at Elderbush Gulch (1913), one is able to witness Griffith's rapid gains in self-confidence and increasing command over the still new medium of motion pictures. Griffith was noted for many achievements, but among the most striking was the use of parallel editing, both for purpose of suspense (An Unseen Enemy, the Lesser Evil) and to generate a powerful social commentary (Corner the Wheat, the Usurer). But as the Unchanging Sea demonstrates, he was also able to harness the technique for more elegiac purposes. In these fifteen films-plus eight bonus shorts-one finds Griffith experimenting with (and thus contributing to the development of) various genres, including the Western (The Last Drop of Water), the crime picture (The Musketeers of Pig Valley) and the seafaring drama (Enoch Arden, one of Griffith's earliest two-reel endeavors).