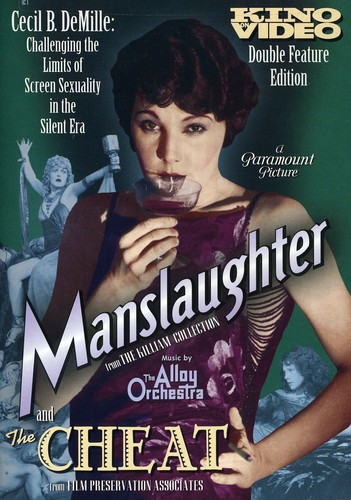 In the silent era, Cecil B. DeMille stood at the forefront of Hollywood directors, a visual stylist who created fashionable fables of women caught in tempests of temptation. Accompanied by a lively score by the Alloy Orchestra, Manslaughter stars Leatrice Joy as a pampered debutante who is forced to confront her irresponsible lifestyle when she causes the death of a traffic cop. To emphasize the debauchery of the Jazz Age elite, DeMille interwove scenes of champagne-soaked parties and Roman orgies, a device that served as a stern warning (while providing a titillating spectacle) to the wayward youth of America. Mixed messages also abound in the Cheat, in which a society woman (Fannie Ward) allows a wealthy Burmese trader (Sessue Hayakawa) to settle a debt for her, not realizing that in exchange he intends to brand her flesh as his own. Highly influential for it's dramatic low-key lighting and it's frank depiction of extra-marital intrigue, the Cheat tapped into a vein of post-Victorian female masochism, eroticism and Orientalism of the day, exploring the taboo desire to be forcefully seduced and possessed by a man of another (as in Rudolph Valentino's Sheik films several years later).
This website uses cookies to personalize content and analyse traffic in order to offer you a better experience.
I accept Learn More
back to top