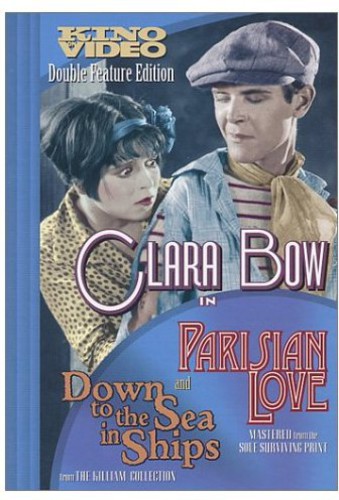 From the cafes of Montemartre to the lush interiors of the Hotel Ritz, Clara Bow reigns supreme in Parisian Love. A playful gamin with "It" aplenty, Marie (Bow) is a wily "Apache" dancer who thrives off the American tourists slumming in Paris's seedy districts. When her lover Armand (Donald Keith) is shot during a robbery, Marie vows revenge upon the wealthy culprit: Pierre Marcel (Lou Tellegen). with the help of a comical underworld matriarch (Lillian Leighton) and a sinister band of thieves, Marie trades in her wool cap and ragged trousers for ermine and lace in an elaborate plot to seduce Marcel. This Kino on Video edition was mastered from the sole surviving print of Parisian Love. For decades considering a "lost" film, the print surfaced at the 1998 Pardenone Silent Film Festival. Newly mastered from an archival 35mm print, Down to the Sea in Ships is an adventure film that powerfully conveys the dangers and excitement aboard the whaling ships of New England. Produced on location by the short-lived Whaling Film Corp., Down to the Sea is not only an engaging romance and rousing adventure film, it is a fascinating (and remarkably authentic) record of the 19th century whaler. Raymond McKee stars as an enterprising young businessman who tries to win the heart of a young Quaker (Marguerite Courtot), in spite of her father's objections. In the first substantial role of her career, Clara Bow co-stars as "Dot," the young tomboy who stows away on the whaling vessel and is caught in a whirlpool of mutiny and intrigue upon the frigid sea.