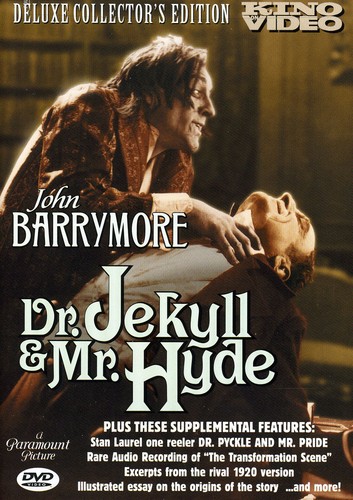 Dr. Jekyll & Mr. Hyde (1920)
Artist: Barrymore/Mansfield/Hurst/Lane
Format: DVD
New: Not on Hand, Let us get it for you
Wish

It took John Barrymore to bring class to the American horror film, at least in the eyes of the industry. Dignified and virtuous as Dr. Henry Jekyll in this 1920 silent, Barrymore transforms into id incarnate as the lascivious Mr. Hyde. With almost no makeup beyond his gnarled, knobby fingers and greasy hair, Barrymore relies almost solely on a bug-eyed grimace, a spidery body language, and pure theatrical flourish. He tends to be hammy as the leering beast of a thug but brings a tortured struggle to the repressed doctor, horrified at the demon he's unleashed, guilty that he enjoys Hyde's unrestrained life of drinking and whoring, and terrified that he can no longer control the transformations. Martha Mansfield costars as his pure and innocent sweetheart, and Nita Naldi (the vamp of Blood and Sand) has a small but memorable role as the world-weary dance hall darling who first "wakens" Jekyll's "baser nature".