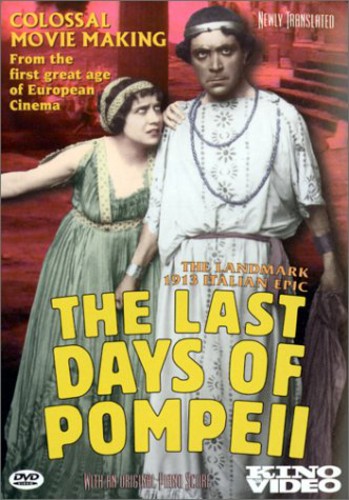 An influential 1913, silent Italian epic that paved the way for the elaborate costume drama, the Last Days of Pompeii romanticizes the final hours of those ill-fated souls living in the shadow of Mount Vesuvius. In this rendition of Edward Bulwer's classic novel, set in 79 A.D., the lives of prominent statesmen, a beautiful woman, a pagan priest, a spiteful witch and a blind beggar girl are carefully interwoven. The intrigues that connect them are brought to a climax in the gladiatorial arena at the moment the sleeping mountain unleashes it's molten fury. The Last Days of Pompeii is among the last of the great tableaux films, in which most scenes are explained by a title, then dramatized within a single wide shot, a presentational style whose origins are more theatrical and literary than cinematic. Within a few short months, this technique would be forever outmoded, due to such films as D.W. Griffith's the Birth of a Nation and Giovanni Pastrone's Cabiria, which helped rewrite the laws of cinematic expression. This Kino on Video edition was digitally mastered from a remarkably crisp 35mm print. It is color tinted with newly translated inter-titles and a dramatic piano score adopted by Beatrice Jona Affron from a variety of classical works.