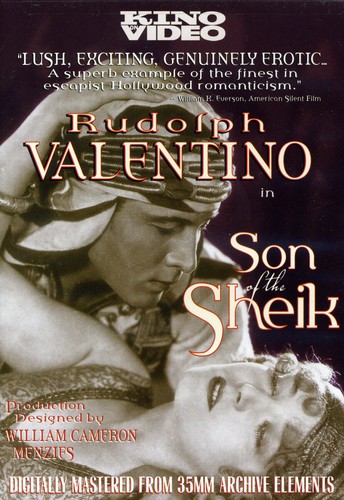 Son Of The Sheik
Artist: Valentino/Banky/Ayres/Love
Format: DVD
New: Not on Hand, Let us get it for you
Wish

In this visually intoxicating sequel to Valentino's career-defining film the Sheik, the screen's greatest lover portrays a cultured yet untamed young man who is lured into a thieves' trap by a beautiful dancer, Yasmin (Vilma Banky). After escaping, he kidnaps the damsel and holds her captive in this desert lair, gowning her in Arabian finery and threatening to unleash his violent passions upon her. Plot is almost inconsequential in the Son of the Sheik. It's sultry beauty and torrid power lie instead in the exotic romance that saturates every frame, as sadomasochistic fantasies are played out against the lavish Orientalist sets designed by William Cameron Menzies (The Thief of Bagdad), lushly photographed by George Barnes (Sadie Thompson). The Son of the Sheik proved to be Valentino's final film. He died suddenly on August 23, 1926 at age 31, shortly after the film was released.