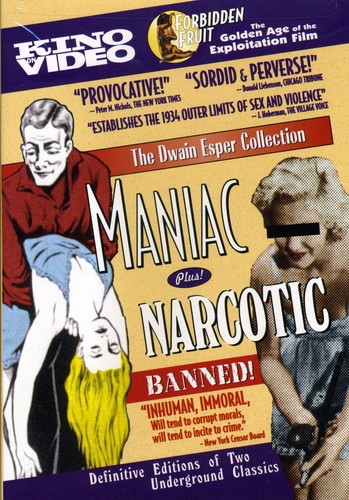 Maniac / Narcotic
Format: DVD
New: Not on Hand, Let us get it for you
Wish

Produced outside of the studio system on virtually no budget, embracing themes that explicitly violated the Motion Picture Production Code (Hollywood's rules of good screen behavior), Dwain and Hildegarde Esper's Narcotic and Maniac are cornerstones of American independent cinema. Touted as educational treatises on drug addiction and mental illness, the films are instead sordid plunges into more varied degradations of body and spirit. Loosely based upon the life of William Davies (an opium-addicted snake oil salesman who was also Hildagarde Esper's uncle), Narcotic follows the downward spiral of an idealistic medical student whose fall from grace leads him to opium dens, a carnival freak show, swanky drug parties, dingy brothels and finally the barrel of his own revolver. In the Esper tradition, this rocky road to ruin is periodically interrupted by perverse imagery that is as beautiful as it is shocking (the Caesarean birth of a baby, car wrecks, a snake fight), all crudely scissored into the narrative at the least expected moment. A raw, visceral cinematic experience unlike any other, Maniac offers a walking tour through the mind of a bona fide lunatic, distorted by fragmented scenes and ugly realities that mimic insanity's own warped perspective. This classic exploitation film is actually a Depression-era rendition of Edgar Allan Poe's "The Black Cat," injected with catfights (both literal and figurative), nudity, necrophilia (a reanimated corpse ravaged by a madman who thinks he's an orangutan), and the ingestion of one fresh eyeball. As a special feature, this DVD includes scenes from the Italian silent film Maciste in Hell, from which Esper borrowed graphic scenes of demonic mayhem. In spite of their excesses, Narcotic and Maniac have an edge of genuine malice that keeps them from being dismissed as camp. The Espers held back nothing in concocting their truly twisted tales, filling every second of screen time with images that range from the perverse to the perplexing. With scenes broken up by the intrusion of scientific texts, stock footage and double exposures of floating demons, the films take the abrasive form of anarchist experimental films, blended with an unhealthy dose of medical horrors.
This website uses cookies to personalize content and analyse traffic in order to offer you a better experience.
I accept Learn More
back to top