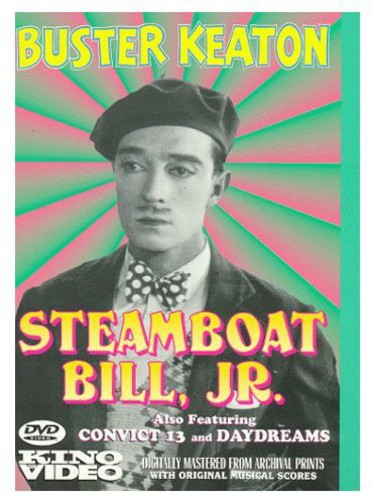 Steamboat Bill, Jr.
Artist: Keaton/Mcguire/Torrence/Lewis/
Format: DVD
New: Not on Hand, Let us get it for you
Wish

Flavored with Americana and loaded with cinematic inventiveness, "Steamboat Bill, Jr.." (1928, 69 min.) was Buster Keaton's final independent production before joining MGM (where his work suffered a steady decline in quality), a comic masterpiece that represents the full breath of it's maker's remarkable talents. Set on the Mississippi River, "Steamboat Bill, Jr.." follows the adventures of a spoiled young man who is forced by his crusty father (Ernest Torrance) to learn river boating. Over the course of the narrative, the scale of comedy gradually expands, from small-scale, nostalgic humor (as when Bill Sr. outfits his son with a new wardrobe) to some of the most elaborate sight gags of Keaton's career. Junior's attempts to single-handedly pilot the rag-tag "Stonewall Jackson" recall the mechanical brilliance of the General and the Navigator, but the films crowning achievement is it's hurricane climax. Highlighted by remarkable special effects, the film includes the legendary stunt in which the front of a building collapses over Junior, who passes unharmed through an open window. Added to this DVD are two Keaton shorts. Surprisingly dark yet wickedly funny, "Convict 13" (1920, 20 min.) combines gallows humor with rapid-fire slapstick. In "Daydreams" (1922, 22 min.), Buster tries to establish himself in a profession-from veterinary assistant to street-sweeper to actor-and, in one of his most cleverly staged chases, is pursued by a herd of New York City "bulls." Digitally mastered from archival prints, with original musical scores.
This website uses cookies to personalize content and analyse traffic in order to offer you a better experience.
I accept Learn More
back to top