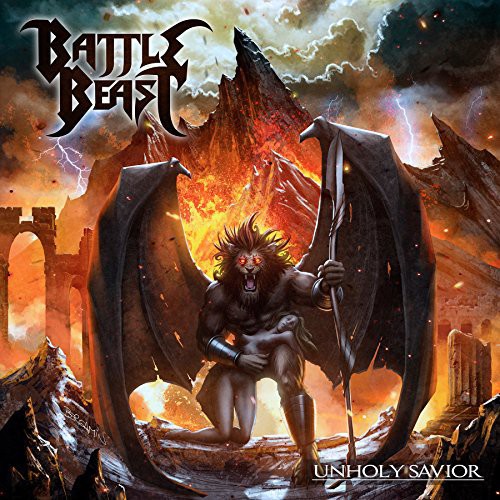 Hailing from the southern edge of Finland, Battle Beast were founded in 2008 and soon established themselves with their trademark of pure crunching riffs, high screams, blistering solos and strong choruses. Following the success of their eponymous second creation Battle Beast, which charted at an amazing #5 in their native Finland and cracked the German Top 100, Battle Beast are now set to release their third studio album entitled UNHOLY SAVIOR. It will be out on January 09 (EU), January 12 (UK) and January 13 (US) 2015 via Nuclear Blast. "I thirst to go further as a human being and the music on this album represents a part of the ongoing spiritual journey - that's what I tend to I call it - which is my road onward. Music-wise the songs have been expanded to a wider area as an effort to call out emotions close to those I myself had during the times of birth of these songs," commented guitarist & vocalist Anton Kabanen about the upcoming new Battle Beast album. "Like always, I wrote songs about the series "Berserk", as well, and the reason behind writing songs about that particular series is that I can strongly relate to that, especially to certain characters and to their way of thinking and feeling," Anton adds.