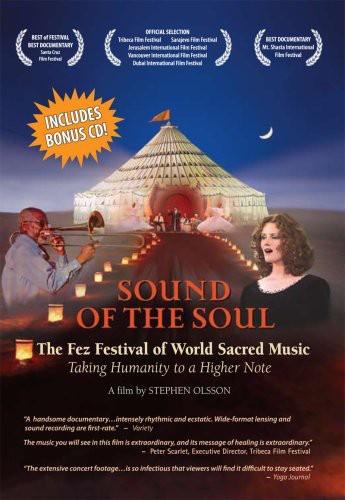 Sound of the Soul
Artist: Francoise Atlan & the Mohammed Brioul Orchestra
Format: DVD
New: Not on Hand, Let us get it for you
Wish

Already a worldwide film festival favorite, Sound of the Soul transports viewers on an exhilarating and inspiring cinematic journey into the heart of the Fez Festival of World Sacred Music. Sound of the Soul celebrates the historic city of Fez, an ancient sanctuary for Muslim, Jewish and Christian inhabitants. This North African desert Mecca is the ideal location for an exceptional music festival that brings together a gospel band from Harlem, the ethereal sound of Irish vocal group Anuna, a transcendent chorus of African Berber women, a soul-wrenching Portuguese Fado singer, a French early music ensemble, and players and vocalists from Afghanistan, England, Russia, Ireland, Mauritania, and Turkey. All are intermixed with unforgettable Moroccan Sufi performers and all are connected through their artistry by profound expressions of love and faith. In a world increasingly polarized by religious conflicts and fundamentalist forces, Sound of the Soul reverberates with unity, understanding, and most of all, hope. This thought-provoking documentary film vividly portrays the universal language of music and an Arab country where people of different faiths and cultures have lived together in relative peace for centuries.