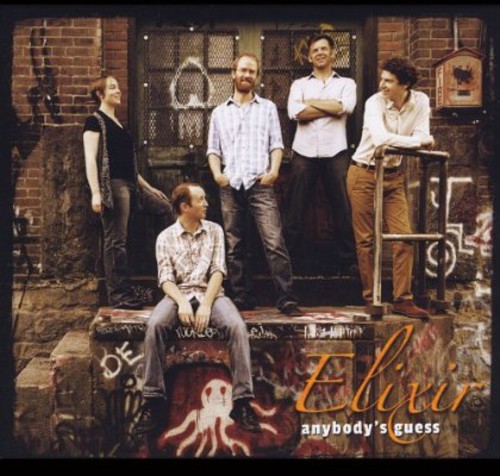 Anybodys Guess
Artist: Elixir
Format: CD
New: Not on Hand, Let us get it for you
Wish

Elixir is excited to announce the release of Anybody's Guess, their third full length studio album. In their eighth year of playing together, you can hear the group digging into their combined sound with new explorations in timbre and fresh arrangement ideas. Elixir is rooted in a love of American fiddle music and inspired by horn section sounds of early jazz, classical music, and funk. Their new album features all this, as well as musical leaps into the unexpected. In other words, it is Anybody's Guess. On Anybody's Guess Elixir is joined by Corey DiMario (acoustic bass), Garrett Sawyer (electric bass), and Matt Labarge (Fender Rhodes). Elixir is a high energy dance band and caller combination that blends superb calling, driving fiddle and guitar playing, and the rich texture and rhythmic excitement of a full horn section. Elixir performs tightly crafted music drawing on a wide range of styles and evoking a variety of moods. Elegant melodies evolve into raucous dixieland horn riffs; transcendent harmonies, playful improvisations, and rock, swing and reggae-inspired rhythms weave in and out of traditional and original Irish, French Canadian and New England tunes. Elixir plays for dances, festivals, camps, weddings and other events, with a repertoire that includes music for contra, square, English and swing dancing; waltzing; couples dancing; and concert programs. Elixir is: Nils Fredland, calling / trombone / vocals Ethan Hazzard-Watkins, fiddle Jesse Readlynn, trumpet / flugelhorn Anna Patton, clarinet / vocals Owen Morrison, guitar / foot percussion Since it's start in 2005, Elixir has evolved a sound that combines musical innovation with strong danceability, and has quickly become popular with dancers and audiences all over the country. In 2008 Elixir released their first full-length recording entitled Super Tonic, which was followed by their critically acclaimed second album, Rampant, released in 2010. Anybody's Guess is the latest in the series and it just might be their best yet! For more info, a performance schedule and much more, please visit elixirmusic.com.
This website uses cookies to personalize content and analyse traffic in order to offer you a better experience.
I accept Learn More
back to top