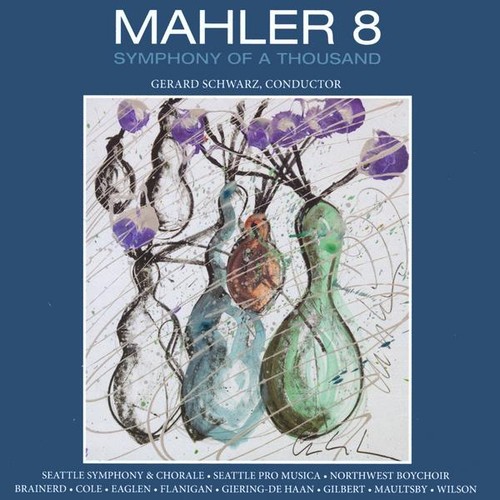 Mahler's Eighth Symphony
Artist: Seattle Symphony
Format: CD
New: Not on Hand, Let us get it for you
Wish

In September, 2008, nearly 400 musicians assembled in Benaroya Hall to perform Gustav Mahler's monumental "Symphony of A Thousand," under the direction of Music Director Gerard Schwarz. Rarely performed due to the sheer number of musicians it requires, Schwarz brought together top vocal soloists, including Lauren Flanigan, Jane Eaglen, Jane Giering-de Haan, Nancy Maultsby, Jane Gilbert, Vinson Cole, Clayton Brainerd and Harold Wilson, Northwest Boychoir, Seattle Pro Musica, Seattle Symphony and the Seattle Symphony Chorale for this historic event. Now this live performance recording has been made available as a limited-edition CD with cover art by Seattle Symphony's Artist in Association, Dale Chihuly. From Seattle Times review, September, 2008: "Never, in my few live experiences of this gigantic work, have all it's multifarious textural strands emerged with such clarity and impact. It was hard to know which to admire more: Mahler's skill in creating an edifice of sound at once massive and lucid, or music director Gerard Schwarz's in realizing both the massiveness and the lucidity. But either way, the result was a ringing endorsement of the hall's acoustic excellence." About Mahler's Symphony No. 8: Gustav Mahler's Eighth Symphony, commonly referred to as "Symphony of A Thousand," is one of the largest musical edifices ever constructed, a piece of epic proportions with it's vast orchestration. Composed in 1906, the work juxtaposes the sacred and secular and consists of two movements, each using voices and orchestra to set a text. The first movement is devoted to the 10th-century hymn Veni, creator spiritus; the second gives us the final scene from Goethe's verse drama Faust. The work was written for his wife Alma Mahler and is the only work in Mahler's repertoire that he inscribed with a dedication.