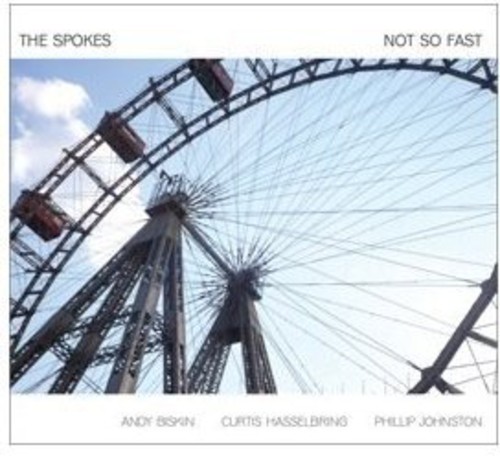 The Spokes: Unique Wind Trio Mixes Jazz and Chamber Music on Debut CD Not So Fast The Spokes is a unique wind trio co-led by three composer/instrumentalists, who each have a distinctive musical personality and diverse history on the New York music scene: Andy Biskin (clarinet), Curtis Hasselbring (trombone) and Phillip Johnston (soprano saxophone). All three compose for the group with their own personal approach, but their music is linked by a lyrical sense of melody, a wry sense of humor, and a distinctive, idiosyncratic compositional voice. They each have a substantial history and discography as bandleaders and as sidemen and their footsteps can be traced through the differing threads of the Downtown scene in New York and beyond. On this debut recording - Not So Fast (Strudelmedia, release date 9/2/11) - The Spokes channel influences from early 20th-century chamber music, New Orleans jazz, Third Stream music, Civil War brass bands, and contemporary classical idioms, all delivered with wit and agility (think Jimmy Giuffre's trios, Debussy's chamber pieces, or Raymond Scott's horn section). Also influential are the many groups led by the composers in their individual careers, such as The Microscopic Septet, Trio Tragico, The New Mellow Edwards, Fast 'N' Bulbous, and Decoupage. ANDY BISKIN Clarinet Texas-born composer and clarinetist Andy Biskin leads several New York-based ensembles and has released three critically acclaimed CD's. Early American: The Melodies of Stephen Foster (Strudelmedia), received four stars in Downbeat Magazine, and appeared on several "Best CDs of 2006" lists, including the Village Voice, Jazz Journalists Association, and AllAboutJazz-New York. Trio Tragico (Strudelmedia), with Dave Ballou (trumpet) and Drew Gress (bass), has been described as "concise, poised, and winsomely lyrical" (Art Lange, Point of Departure), and was voted one of the ten best CDs of the year by the editors of Amazon.com. Biskin's debut album Dogmental, on Gunther Schuller's GM Recordings, features his New Orleans-inspired quintet, with Ron Horton (trumpet), Bruce Eidem (trombone), Ben Allison (bass), and Matt Wilson (drums). The album was hailed as "a little triumph" by The New York Times and was featured twice on NPR's 'Fresh Air with Terry Gross'. Biskin is also the creator, composer, and animator of "Goldberg's Variations," a suite of twelve classic Rube Goldberg inventions, brought to life with new video animations and original score performed live by a jazz sextet. "... energetic, creative, and at the leading edge of jazz's modern mainstream." -All About Jazz "Mixing mania and melancholy in a rather uncanny way... a gleeful modernist, his arrangements have no problem giving the material a hotfoot while still allowing their melodies and sentiment to radiate.' -The Village Voice CURTIS HASSELBRING Trombone A resident of Brooklyn NY, Curtis Hasselbring is a trombonist, guitarist and composer. He leads the ensemble The New Mellow Edwards, who have released two CDs and have received wide critical acclaim including being listed among the top releases of the year in All About Jazz-NY and the Village Voice. He is a much sought-after performer in groups of an incredibly diverse variety, including Medeski, Martin and Wood, Matt Darriau, Tom Harrell, Slavic Soul Party, the Either Orchestra, Cuong Vu, Frank London, and Bobby Previte. Curtis mixes up his musical life by playing everything from eastern European brass band music to country rock to electronica and of course, his first passions, jazz and improvised music. Curtis also is active as an electronic music composer creating works and remixing other people's works under the name Curha. Curtis leads an ensemble based on his solo electronic works called the "Curha-chestra", as well as "Decoupage", a quartet of trombone, vibraphone, guitar and percussion, that plays Curtis's spare yet highly orchestrated chamber pieces. "a real tone scientist with a generous sense of humour and a highly developed sense of the absurd." -John Chacona, Signal to Noise "Hasselbring is supple, robust and expressively accented."  -Julian Cowley, Wire PHILLIP JOHNSTON Soprano Saxophone A saxophonist, composer and arranger of both jazz and new music, Phillip has been a significant figure in the underground music scene of New York's downtown since the beginning of the 1980's. He has composed extensively for film, silent film, theatre, and modern dance, collaborating with, among many others: Paul Mazursky, Art Spiegelman, Richard Foreman, Phillip Haas, Doris Dörrie, Suzan-Lori Parks, and Karole Armitage. Throughout, he has maintained a parallel career as a saxophonist, both working with others and leading his own bands. Bands he has led or co-led include The Microscopic Septet, Big Trouble, The Transparent Quartet, and Fast 'N' Bulbous: The Captain Beefheart Project, featuring Gary Lucas. As a sideman/collaborator he has worked with artists ranging from John Zorn, Guy Klucevsek, Ned Rothenberg, Mikel Rouse and Wayne Horvitz, to Earl King, The Raybeats, The dBs, and Mofungo. The Microscopic Septet was listed as #5 under Jazz Group in the 2011 Downbeat Critics Poll. "...seminal, brilliant post-modern jazz" -Downbeat "a world-class instrumentalist" -The New Yorker.