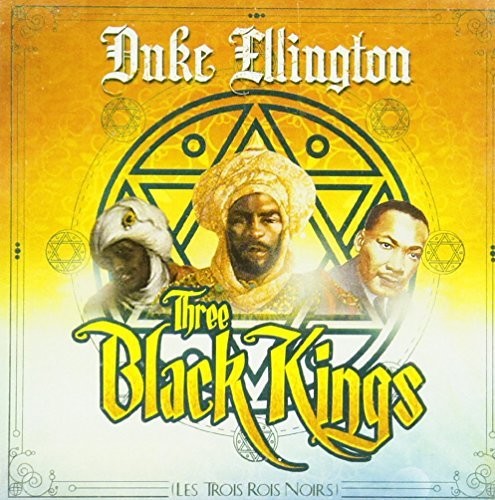 Three Black Kings (With The Polish National Philharmonic)
Artist: Duke Ellington & His Orchestra
Format: CD
New: Not on Hand, Let us get it for you
Wish

Following it's international debut at Yale University in 1977, Mercer Ellington and the Duke Ellington Orchestra along with the Polish National Philharmonic, presented Duke Ellington's final extended piece, "Les Trois Rois Noirs" (The Three Black Kings) at the Polish Jazz Festival "Jazz Jamboree". This recording was released as a collectors item only in 1981, but has never seen light of day since. Here in 2017, we finally are able to present this truly incredible work, orchestrated by Luther Henderson, under the direct instruction of The Maestro himself, on his hospital bed in 1974 in New York City, where unfortunately Ellington would soon pass away from Cancer. Thanks to Henderson and Ellington's son Mercer, we now have these "concerto grosso" arrangements for Jazz Big Band and Symphony Orchestra. The piece itself is incredibly powerful and spiritual, based on Elington's vision of HIS Three Black Kings: The Black King of the Magi, King Solomon, and a man he admired and met personally, Dr. Martin Luther King., Jr. Some strong members of the later Ellington band remained in the band here, such as Barrie Lee Hall, Rocky White, Harold Minerve, and other posthumous Ellingtonians such as James Bolden, J.J. Wiggins, and David Young. It should be mentioned that this recording also includes a truly definitive version of Ellington's only Piano Concerto, "New World A-Coming", featuring guest soloist Adam Makowicz, the Polish Jazz Star who does an expressive and thorough interpretation, definitely up to par with Ellington himself. Finally, we get to hear the full blown orchestration of the Alvin Ailey Ballet piece The River, composed by Ellington in it's entirely, again with the assistance of Luther Henderson, orchestration, based on Ellington's own Big Band "demo" versions he recorded himself for Ailey's choreographic use. This rare rendition is a super-charged soulfully exciting journey through a man's life, perhaps autobiographical for Duke, taking us from the genesis of birth to old age and back again. However it is the complete and purely Ellingtonian official version of Three Black Kings that will kick your heart and soul into high gear, as you finally will get to hear Ellington's final vision the way he indeed wanted it heard
This website uses cookies to personalize content and analyse traffic in order to offer you a better experience.
I accept Learn More
back to top