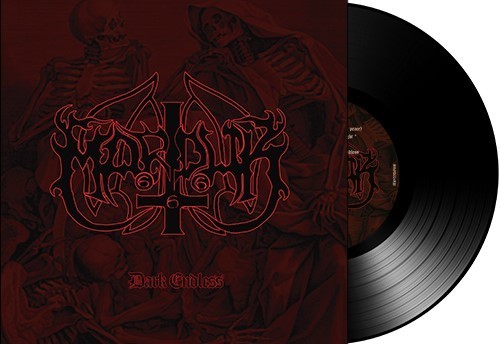 Dark Endless
Artist: Marduk
Format: Vinyl
New: Not on Hand, Let us get it for you
Wish

Vinyl LP pressing. Dark Endless is the debut studio album by Swedish black metal band Marduk. It was recorded and mixed at Hellspawn Studios during four days in June 1992 and released that December by No Fashion Records. Like many early black metal albums, it mixes black metal vocals with predominantly death metal stylings. Dark Endless is the only Marduk studio album to feature Andreas Axelsson on vocals and Rikard Kalm on bass, as by Marduk's second album Those of the Unlight, they had been replaced. Marduk formed in 1990 in Norrköping, Sweden. Their name is derived from the Babylonian god Marduk, patron deity of Babylon.