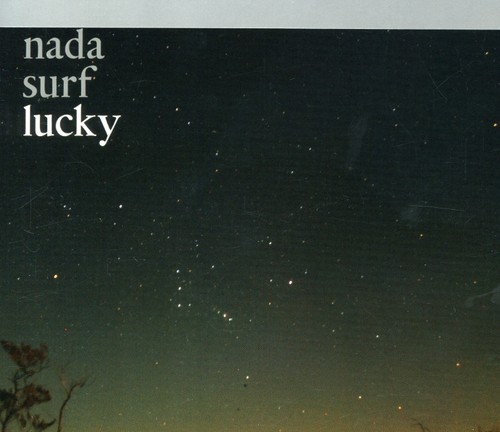 NY's Nada Surf has been together for almost a dozen years, becoming one of America's most resilient and truly independent bands. Along with their previous two albums, 2003's LET GO and 2005's THE WEIGHT IS a GIFT, LUCKY is the final piece of a rather astounding trilogy that, taken as a whole, manages to express more about the frustrations and joys of modern life than most artists can expect to assemble over a career. Guest appearances include Ben Gibbard, Sean Nelson, Ed Harcourt, Phil Wandscher and John Roderick.

Watching VH1's "100 Greatest Songs of the '90s" special (turn a few pages to our Sheryl Crow spotlight for more on that), it was astonishing how many one-hit wonders didn't even come close to their second day in the sun. The mainstream may dump Nada Surf in that category, as 1996's "Popular" was their first and only true chart-topper, but the indie world knows better. Their follow-up to High/Low (the "Popular" album), The Proximity Effect, was notoriously strangled by Elektra red tape (a.k.a. "Not sure if we hear a hit in here, boys."), but they justifiably broke out of the major label ghetto to massive acclaim with 2002's Let Go, their Barsuk debut. Any traces of the distorted post-grunge quirk from their debut have long since vanished in favor of tasteful, heartfelt guitar pop, not unlike BFFs Death Cab for Cutie. See, sometimes nice guys do finish first. Or, at least, not dead last.
This website uses cookies to personalize content and analyse traffic in order to offer you a better experience.
I accept Learn More
back to top